The Resignation of Pope Benedict XVI

I have convoked you to this Consistory, not only for the three canonizations, but also to communicate to you a decision of great importance for the life of the Church.

After having repeatedly examined my conscience before God, I have come to the certainty that my strengths, due to an advanced age, are no longer suited to an adequate exercise of the Petrine ministry.

I am well aware that this ministry, due to its essential spiritual nature, must be carried out not only with words and deeds, but no less with prayer and suffering. However, in today’s world, subject to so many rapid changes and shaken by questions of deep relevance for the life of faith, in order to govern the bark of Saint Peter and proclaim the Gospel, both strength of mind and body are necessary, strength which in the last few months, has deteriorated in me to the extent that I have had to recognize my incapacity to adequately fulfill the ministry entrusted to me.

For this reason, and well aware of the seriousness of this act, with full freedom I declare that I renounce the ministry of Bishop of Rome, Successor of Saint Peter, entrusted to me by the Cardinals on 19 April 2005, in such a way, that as from 28 February 2013, at 20:00 hours, the See of Rome, the See of Saint Peter, will be vacant and a Conclave to elect the new Supreme Pontiff will have to be convoked by those whose competence it is.

Dear Brothers, I thank you most sincerely for all the love and work with which you have supported me in my ministry and I ask pardon for all my defects. And now, let us entrust the Holy Church to the care of Our Supreme Pastor, Our Lord Jesus Christ, and implore his holy Mother Mary, so that she may assist the Cardinal Fathers with her maternal solicitude, in electing a new Supreme Pontiff.

With regard to myself, I wish to also devotedly serve the Holy Church of God in the future through a life dedicated to prayer. 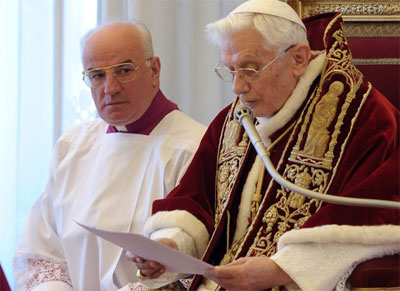 Pope Benedict XVI announcing his resignation on Monday at the Vatican. At left is Msgr. Franco Camaldo, a papal aide. Source: L'Osservatore Romano, via Associated Press

Pope Benedict XVI has given his resignation freely, in accordance with Canon 332 §2 of the Code of Canon Law.

Pope Benedict XVI will not take part in the Conclave for the election of his successor.

Pope Benedict XVI will move to the Papal residence in Castel Gandolfo when his resignation shall become effective.

When renovation work on the monastery of cloistered nuns inside the Vatican is complete, the Holy Father will move there for a period of prayer and reflection

Have you ever thought of resigning?

When the danger is great one must not run away. For that reason, now is certainly not the time to resign. One must stand fast and endure the difficult situation. That is my view. One can resign at a peaceful moment or when one simply cannot go on. But one must not run away from danger and say that someone else should do it.

Is it possible then to imagine a situation in which you would consider a resignation by the Pope to be appropriate?

Yes, if a Pope clearly realizes that he is no longer physically , psychologically and spiritually capable of handling the duties of his office, then he has the obligation to resign.

Pope Benedict XVI, Light of the World: The Pope, The Church and the Signs Of The Times (2010)

After examining his conscience “before God,” he said in a statement that reverberated around the world on the Internet and on social media, “I have come to the certainty that my strengths, due to an advanced age, are no longer suited to an adequate exercise” of his position as head of the world’s one billion Roman Catholics. ...

While there had been questions about Benedict’s health, the timing of his announcement sent shock waves around the world, even though he had in the past endorsed the notion that an incapacitated pope could resign.

“The pope took us by surprise,” said Father Lombardi, who explained that many cardinals were in Rome on Monday for a ceremony at the Vatican and heard the pope’s address. Italy’s prime minister, Mario Monti, said he was “very shaken by the unexpected news.”

According to the Associated Press, "The last pope to resign was Pope Gregory XII, who stepped down in 1415 in a deal to end the Great Western Schism among competing papal claimants."

Considering, however, that Joseph Ratzinger was already 78 -- one of the oldest popes in history when elected -- and had by the time of his election petitioned Pope John Paul II twice to resign his post as Prefect for the Congregation for the Doctrine of the Faith (requests which John Paul II in his wisdom had denied), the Holy Father's decision, while shocking, is to me also understandable, being the recognition, made with a clear mind, that he has reached a point in life where he no longer has the capacity to fulfill the requirements of the office.

News of the Holy Father's resignation of course have sparked concerns about his health and well-being.

Posted by Christopher Blosser at 9:11 AM