Writing from Uganda, Martyn Drakard of MercatorNet exclaims "The international media has a woeful ignorance of Africa," and wonders: "Why don't they listen to someone who knows? -- Such was evident from the media's coverage of Benedict's visit in Africa:

As he flew from Rome to Cameroon for his first African trip, Benedict XVI held a press conference. He spoke of many things relevant to Africa: the credit crisis, its ethical dimension, its social welfare dimension; solidarity between the developed and developing world; corruption; the vibrancy of the faith and energy of the people; how he hopes to implement Catholic social teaching; and a forthcoming Synod of African Bishops. He even rebutted suggestions that he was “lonely” in the Vatican.

Yet what did the media pick up? That the Pope is opposed to condoms as a solution to Africa’s supposedly overwhelming problem: AIDS. And, in fact, he was right to say that condoms are only making the problem worse.

"I don't think I've ever covered a papal trip where the gap between internal and external perceptions has been as vast as over these three days. It's almost as if the pope has made two separate visits to Cameroon: the one reported internationally and the one Africans actually experienced.

So for those whose only (or chief) impression of the Pope's visit to Africa by way of the mainstream media was that he said something about condoms, what follows is an ongoing compilation of news, coverage and commentary on what really happened.

I will be making my first apostolic visit to Africa from Tuesday, March 17, to Monday, March 23. I will travel to Cameroon and to its capital, Yaoundé, to deliver the "instrumentum laboris" for the Second Special Assembly for Africa of the Synod of Bishops, which will take place in October here in the Vatican. From there I will travel to Luanda, the capital of Angola, a country that, after a long civil war, has found peace again and is now called to rebuild itself in justice.

With this visit I intend to embrace the whole African continent: its thousands of differences and profound religious soul; its ancient cultures and its toilsome road to development and reconciliation; its grave problems, its painful wounds and its enormous possibilities and hopes. I intend to confirm the African Catholics in faith, to encourage the Christians in their ecumenical commitment, and bring to all the announcement of peace that the Lord has entrusted to his Church. [...]

Yes, dear brothers and sisters! I depart for African with the awareness of having nothing else to propose and give to those whom I will meet if not Christ and the Good News of his cross, mystery of supreme love, of divine love that defeats all human resistance and in the end makes forgiveness and love of enemies possible. This is the grace of the Gospel that is capable of transforming the world; this is the grace that can renew Africa, because it generates an irresistible power of peace and of deep and radical reconciliation. The Church does not pursue economic, social and political objectives; the Church proclaims Christ, certain that the Gospel can touch the hearts of all and transform them, renewing persons and society from within. -- Excerpted from Pope Benedict XVI's mid-day Angelus March 15, 2009. 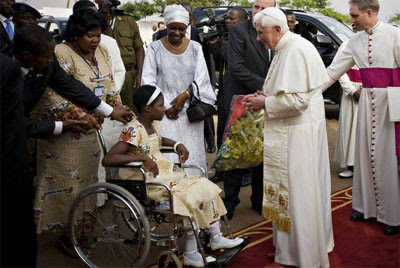 Pope Benedict XVI listens to Marie-Madelaine Avouzoa, 12, (seated) whose legs were amputated at the knees and who lost her fingertips after a blood transfusion for malaria infected her limbs, at the Center for the Rehabilitation of the Handicapped, in Cameroon's capital Yaounde, March 19, 2009. Photo Credit: REUTERS 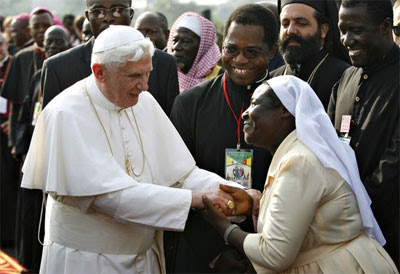 Pope Benedict XVI is greeted by a Cameroonian nun upon his arrival at the airport in Yaounde March 17, 2009. Photo Credit: REUTERS 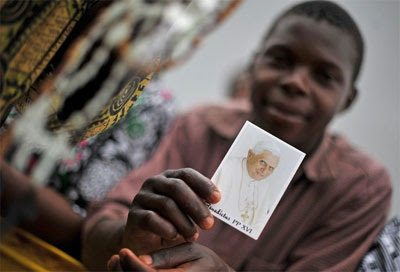 A boy holds up a portrait of Pope Benedict XVI outside the Amadou Ahidjo stadium, where the Pope gave mass in Yaounde on March 19, 2009. Photo Credit: AFP / GETTY

"I don't think I've ever covered a papal trip where the gap between internal and external perceptions has been as vast as over these three days. It's almost as if the pope has made two separate visits to Cameroon: the one reported internationally and the one Africans actually experienced.

In the U.S. and many other parts of the world, coverage has been "all condoms, all the time," triggered by comments from Benedict aboard the papal plane to the effect that condoms aren't the right way to fight AIDS. In Africa, meanwhile, the trip has been a hit, beginning with Benedict's dramatic insistence that Christians must never be silent in the face of "corruption and abuses of power," and extending through a remarkable meeting with African Muslims in which the pope said more clearly and succinctly what he wanted to say three years ago in his infamous Regensburg address, and without the gratuitous quotation from a Byzantine emperor." (Excerpted from Benedict in Cameroon a tale of two trips National Catholic Reporter March 20, 2009. 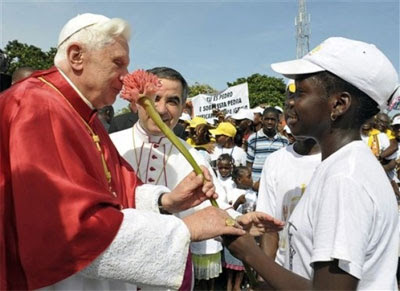 Pope Benedict XVI is presented with a flower during his visit in Luanda, Angola, Saturday, March 21, 2009. Photo Credit: L'Osservatore Romano

Posted by Christopher Blosser at 12:16 PM