Benedict XVI: His Life and Thought, by Elio Guerriero 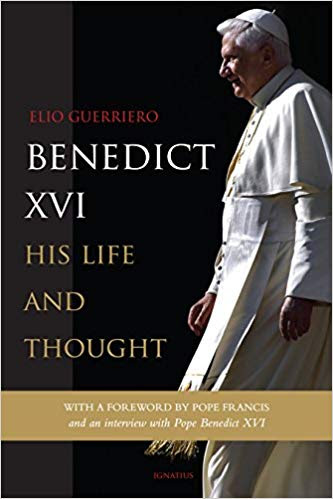 Benedict XVI: His Life and Thought
by Elio Guerriero.
Ignatius Pr (November 6, 2018). 715 pgs.
In these pages Benedict XVI shares his story for the first time since his retirement from the papacy. Joseph Ratzinger is widely recognized as one of the most brilliant theologians and spiritual leaders of our time. Born in Germany in 1929, he lived through Nazism, war, and Communism, like John Paul II, who after his surprising election in 1978, insisted on having Ratzinger at his side for his whole twenty-seven-year pontificate.

When Ratzinger was elected Pope in 2005, he took the name Benedict XVI. He opened a path of purification for the Roman Catholic Church at a time when it was shaken by financial and sexual scandals. He has repeatedly said that Europe must return to its Christian roots and build a new humanism for the twenty-first century.

Benedict XVI was misunderstood by many, and in 2013, he astonished the world by resigning from the papacy. Many saw this gesture as a sign of the decline of Catholicism, but it was the opposite: it was a seed sown in the hope of bringing the Church a younger, more vigorous leadership in the face of so many daunting challenges.

Elio Guerriero, who for many years has had an ongoing relationship with the Pope Emeritus, presents a thorough, well-rounded portrait of the brilliant intellectual and humble man of the Church whom many more have come to love and respect since his resignation. This book includes a Foreword by Pope Francis, and contains the first interview of Benedict XVI since the end of his pontificate.

Elio Guerriero, theologian, philosopher, and historian, is the longtime director of Communio, and editorial manager at Jaca Book and Edizioni San Paolo. He edited the Italian edition of the History of the Church directed by A. Jedin. His other books include Hans Urs von Balthasar, The Drama of God, and Saint Giana Molla: Wife, Mother, and Doctor.

Posted by Christopher Blosser at 9:09 PM